Lyme Disease Carrying Tick Has Spread to 50% of U.S. Counties 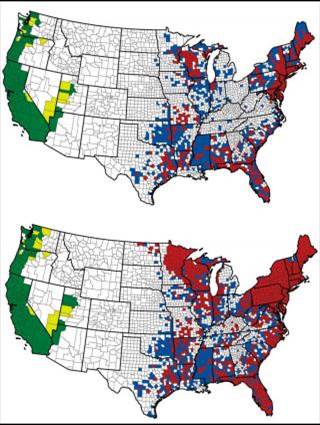 A recent study by the Centers for Disease Control and Prevention has discovered that ticks that spread Lyme disease now live in almost half of U.S. counties. However, the risk of people contacting Lyme disease is not equal across areas of the United States. The blacklegged ticks may carry the bacteria Ixodes scapularis, also known as deer ticks, and the western blacklegged tick, Ixodes pacificus. These ticks are typically found in wooded and grassy areas. The blacklegged tick has undergone a population explosion, doubling its established range in less than 2 decades. It is now reported in 45.7% of U.S. counties, up from 30% in 1998. Blacklegged ticks are found in 37 states across the eastern United States. The rarer western blacklegged tick, restricted to just six states in Pacific coast, has shown only modest increases in established populations, from 3.4% to 3.6% of counties. Combined, these two Lyme disease vectors are now found in half of all U.S. counties. According to the CDC, avoiding areas of thick vegetation, using a strong repellent, and showering after hiking are usually enough to avoid contact.

Map Courtesy of American Association for the Advancement of Science.